It took me a while to figure out what went wrong. So now that I've got things working correctly, I thought I'd post this example and solution to hopefully save you some time.

There are two ways to resolve this issue :
- By creating ObjectFactory
- By adding jaxb.index file

The jaxb.index file is a text file contains a listing of the classes on the containing package that have JAXB annotations.
Note : The name of the clases is their simple name not their classified name.


Rather than creating a ObjectFactory, I guess adding a jaxb.index file is much easy part. Just you need to add class names to the file and place the file in the package (directory) where your JAXB annotated classes reside.
Its just the class name, not the fully qualified name (the package name is determined by the directory you placed the file in) or the.class name.

If the package following package does not have jaxb.index file, this change will cause the test to throw the JAXBException. Add the file and everything works great.

- It makes reading  and writing of XML via Java very easy.

- It is used heavily by JAX-WS

- The JAXBContext class provides the client's entry point to the JAXB API. It provides an abstraction for managing the XML/Java binding information necessary to implement the JAXB binding framework operations: unmarshal, marshal and validate.

The Marshaller class provides the client application the ability to convert a Java content tree back into XML data.

The Unmarshaller class provides the client application the ability to convert XML data into a tree of Java content objects. 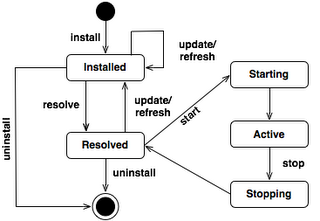 What are Java Annotations?

Annotations is a new feature from Java 5. Annotations are a kind of comment or meta data you can insert in your Java code. These annotations can then be processed at compile time by pre-compiler tools, or at runtime via Java Reflection. The annotation can be attached to Classes, Methods,Parameters,Fields etc.

How to create custom Annotation?

To create an annotation we use the interface keyword and add an @ symbol infront of it. The @ symbol will tell the compiler that it doing some business with an annotation.

@Target(ElementType.TYPE) means that the annotation can only be used ontop of types (classes and interfaces typically). You can also specify METHOD or FIELD, or you can leave the target out alltogether so the annotation can be used for both classes, methods and fields.

You can access the annotations of a class, method or field at runtime. Here is an example that accesses the class annotations:

It is possible to add annotations to method parameter declarations too. Here is how that looks:

Notice how the Method.getParameterAnnotations() method returns a two-dimensional Annotation array, containing an array of annotations for each method parameter.

Here is an example of a field with annotations:

The whole tutorial is on the github:
https://github.com/abdulwaheed18/Annotation-Tutorial
By Abdul Waheed No comments: